GameSense 10 Year Anniversary - Looking Back, Ahead

Musings on the development of the first official statistics system for professional esports.

Ten years ago, on December 17, 2004, GameSense was publicly released on GotFrag's website during the 2004 Winter CPL. What started as a simple idea for a better scorebot turned into an enterprise-level statistics system covering 4 games, 120+ events, and 4000 matches - processing 100,000s of log entries. Its development was the most rewarding experience I've ever had - it combined my love of Counter-Strike, programming, and statistics into a system that became the de facto standard for measuring players' skill. Working with Jason Coene, Lee Chen, Trevor Schmidt, Mark Cheben, Scott Smith, and the rest of the GotFrag staff was fun and exciting. We really felt like we were contributing to the advancement and legitimization of computer gaming as a sport, and I'm proud to have been part of it. 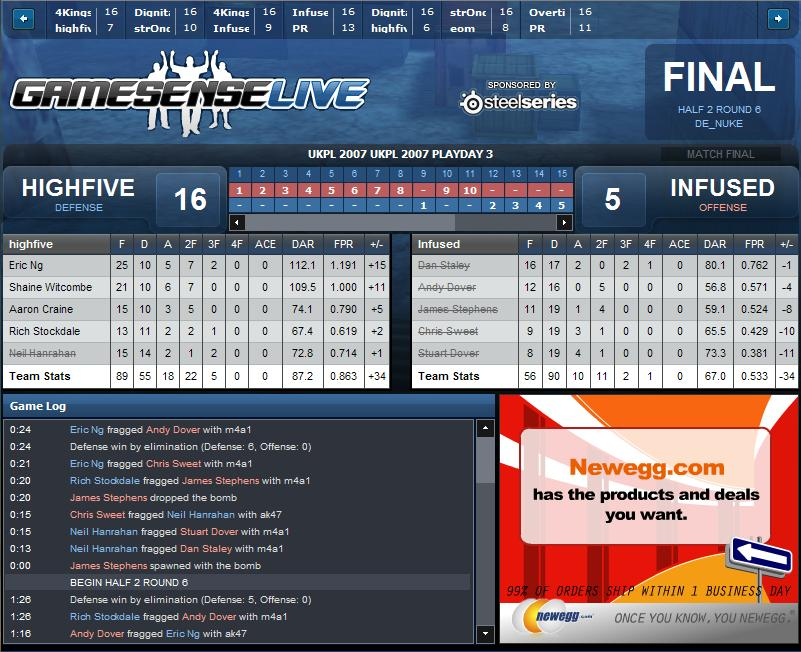 If you want verbose, extensive details on the entire project you can visit my GameSense page. I also added a GitHub repository to keep a record of various aspects of the system. Check it out from time to time as I dig through my old hard drive and post more content.

It was bittersweet when GotFrag was sold to MLG in 2007; full company acquisitions weren't as common as little as 7 years ago and I don't think any of us knew what it meant for GotFrag moving forward. I believe most of us were optimistic at first, thinking we could continue innovating with the support of a larger company. My work on GameSense was always done in my spare time as I already had a career in software development; I thought I might be able to leverage this MLG sale into my dream of developing GameSense full-time.

Unfortunately, things shifted rapidly after the buyout and it was clear that MLG's direction was to focus on console games. Development on the next version of GameSense stopped, and that's pretty much the last time I've been involved in the esports community. Looking back, it's really kind of a shame because we had so many features coming out that were going to blow people's minds. We had fantasy leagues ready to go. GameSense was going to be made available to all teams so they could track their stats in pugs and online matches. I created an AMX Mod X plugin that would control the entire match experience with real-time automated GameSense integration. We were even going to track gun and equipment purchases for analysis.

My favorite feature that never saw the light of day was the ability to track X/Y/Z coordinates of players, from where they planted the bomb to where each bullet hit and frag occurred. We asked Valve to add a new level of log detail and include this, but they stated they were no longer adding features to 1.6 (presumably to promote CS:Source). I ended up having to code it in to our AMX plugin and modify the log line myself. Regardless, it was exciting - people who couldn't watch on HLTV could open their web browser and see a live 2D overhead map view of a match, follow the players' movement, and see 'shot carts' like you see in the NBA. We'd be capable of doing advanced analysis on where teams and players were most effective on each map, how often they planted in each site, etc. No one ever got to experience this, and I really wish they had.

I think the 'problem' everyone was trying to figure out 10 years ago was how to turn esports mainstream and do it quickly. They wanted to see games and highlights on SportsCenter and be viewed as legitimate. Unfortunately this led to events like the Cyber X Games that cost a lot of young people money in flights and hotels for a tournament that never finished (I managed professional CS team e7 at the time, saw this coming, and convinced them not to attend). Players had trouble receiving prize money on time if at all. Many small 'companies' sprung up to host game servers to teams and offered sponsorships of flight/event costs, then backed out without ever paying a dime. 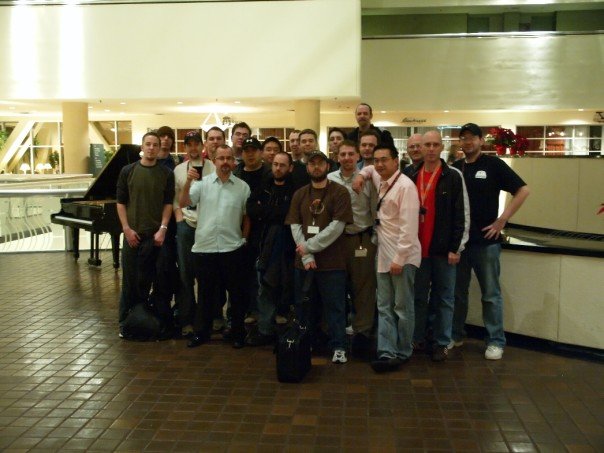 Members of the GotFrag team at Winter CPL 2004

Even my development process was rudimentary by today's standards. My 'source control' was copying folders and changing the version name. When I first started the project, PHP hadn't even reached version 5.0, Firefox/Chrome didn't exist, CSS3 wasn't on anyone's radar, AJAX wasn't a well-formulated or understood technology, and jQuery wouldn't come out for 2 more years.

It really was the wild wild west back then - anyone with money (or the guise of money) could jump into the scene and immediately become influential. Many young people were taken advantage of. Everyone wanted esports to be relevant...to matter. Sites like GotFrag and systems like GameSense tried to help it along, but the simple truth is it would (and will) just take time.

Even though I have been out of the scene since 2007 (and would like to get back into it eventually), I still try to keep tabs on what's going on in the gaming world - mostly via SirScoots's Twitter account. Jason and Trevor are doing great work at DOTABUFF. Twitch just sold for gobs of money, and sports stadiums are selling out so players can watch events live. It's great that all of this is happening, and I think what everyone was missing 10 years ago was simply patience. Systems like this take time. The current generation of players actually grew up with technology, cable connections, online gaming, and a more evolved internet. They didn't have to play Doom II over a 14.4k modem while using *70 before dialing to avoid call waiting interrupting their game.

The point is, it's no longer taboo to be interested in gaming. It's not weird to follow someone on Twitch and watch them play games. The current generation grew up with this being normal, and it's just something that's going to be ingrained in their culture. In the 90s we were still having debates over video game violence and if Doom caused Columbine.

That doesn't mean there isn't a long way to go. I've seen talks of unions and player protections, contracts that stipulate how players behave themselves and that they can be terminated for any number of reasons. Cheating is still rampant, and there are issues to solve - figuring out a compromise between forcing players to play in a fishbowl to prevent cheating, and letting them be on a stage with 1000s of people cheering them on live. Gambling on and throwing matches is going to have to be monitored.

But hey, doesn't that sound like the professional sports we have now? The mere presence of these issues indicates how big gaming has become. We may very well see an incredible play on SportsCenter one day, and that's pretty cool.